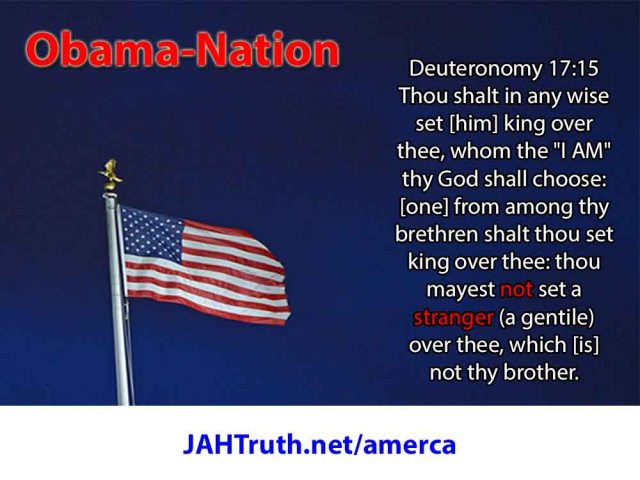 Short link to this page: http://wp.me/p4CUXT-vf

Barak Obama is not from either of the Israelite tribes of Dan or Manasseh; the white Americans JAHTruth.net/amerca, which contravenes God’s Law.

Matthew 5:17 Think not that I am come to destroy The Law, or the Prophets: I am not come to destroy, but to fulfill.
5:18 For verily I say unto you, Till heaven and earth pass, one jot or one tittle shall in no way pass from The Law, till all be fulfilled.

Besides the fact that he is one in a line of visibly incompetent USA leadership, which is deliberately engineered to be like that to create the conditions of chaos for the ushering in of the New World Order. See the below excerpt from the Protocols of the Learned Elders of Zion http://JAHTruth.net/illumin,

PROTOCOL 14
ASSAULT ON RELIGION
2. At the same time we shall not omit to emphasise the historical mistakes of the goy governments, which have tormented humanity for so many centuries by their lack of understanding of everything that constitutes the true good of humanity, in their chase after fantastic schemes of social blessings, and have never noticed that these schemes kept on producing a worse and never a better state of the universal relations which are the basis of human life….
3. The whole force of our principles and methods will lie in the fact that we shall present them and expound them as a splendid contrast to the dead and decomposed old order of things in social life.
4. Our philosophers will discuss all the shortcomings of the various beliefs of the goyim. But no one will ever bring under discussion our faith from its true point of view since this will be fully learned by none save ours, who will never dare to betray its secrets.

An OPEN LETTER To Donald Trump – Donald Trump Is Advised To Speak The Truth  As No Candidate In Modern American History http://stateofthenation2012.com/?p=24117

And it seems that he was effectively appointed by Elizabeth Battenberg/the queen. See this quote “Look at all the people sitting in federal prisons who were convicted of this so-called crime? What makes it worse is the fact that the Queen of England, entered into a Treaty with the federal government for the taxing of alcoholic beverages and cigarettes sold in America. The Treaty is called The Stamp Act and in this Act, the Queen ordained that her subjects, the American people, are exonerated of all other federal taxes! So the federal income tax and the state incomes taxes levied against all American’s is contrary to an International Treaty and against the Sovereign Orders of the Queen! Like it or not, the Queen is our Monarch and Master! The Tax is illegal and still people have been prosecuted and imprisoned, contrary to law!” http://beforeitsnews.com/politics/2015/11/the-founding-fathers-are-traitors-to-ourselves-and-our-posterity-meant-them-not-us-2759902.html?currentSplittedPage=5