82. The World’s Greatest Criminal – By a Long Margin (See Narrative) 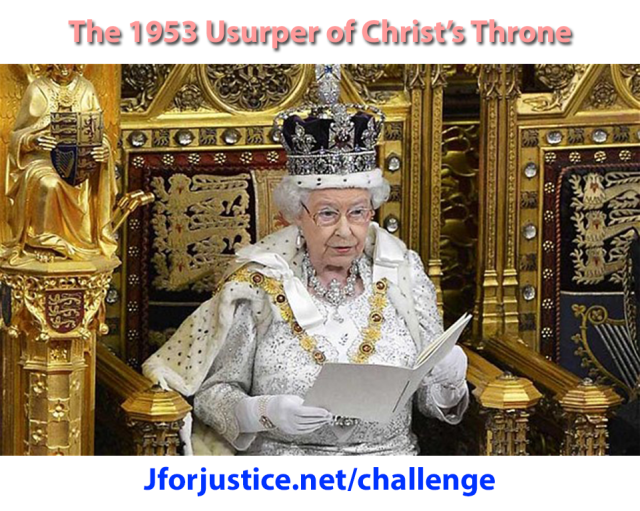 Lawful UK (and territories) Challenge to her fraudulent Jurisdiction and Sovereignty Jforjustice.net/challenge
(which will irrefutably stand up in any “court” against any victimless so-called charges against you – for rest of the world challenge to jurisdiction bulletprooflaw.wordpress.com)

By the time of the 1953 coronation the 3 to 4,000 year old British Palestine Porphyry Coronation Stone/ Jacob’s Pillar/ Lia Fail had already been taken back to Scotland – 4am Christmas morning 1950 – from whence it came in 1296 with Edward I Longshanks, and a fake Perthshire sandstone copy was given in its place, so that Mrs. Elizabeth A. M. Battenberg (alias queen) could not be Lawfully crowned, and she wasn’t, because she was crowned on the 2nd June 1953 upon the fake copy, and the original is still in Scotland in hiding somewhere.

See the crimes that render her abdicated – not that she ever was sovereign from the word go – perpetrating the greatest scam on Earth Jforjustice.net/Challenge

336lbs Fake copy that Mrs. Battenberg was crowned upon

From: CONSPIRATORS’ HIERARCHY: THE STORY OF THE COMMITTEE OF 300 by Dr. John Coleman

“This is precisely what happened when their servant George Bush was ordered to make war on Iraq. Within two weeks, not only the U.S. but almost the entire world public-opinion was turned against Iraq and its President Saddam Hussein. These media change-artists and news-manipulators report directly to the Club of Rome which in turn reports to the Committee of 300 at whose head sits the Queen of England ruling over a vast network of closely-linked corporations who never pay taxes and are answerable to no-one, who fund their research-institutions through foundations whose joint-activities have almost total control over our daily lives.”

Why the secrecy? So that they can continue in their obscene and fraudulent wealth?